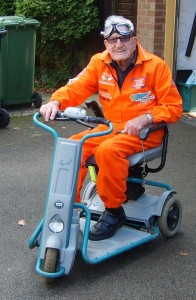 Tom Lackey, 93 from Shirley West Midlands,, will attempt his 31st wing walk in March 2014 from Morocco to the rock of Gibraltar in aid of Cancer Research.

Tom Lackey is an inspirational individual who has raised over £1 million for several charities and currently holds nine Guinness world records relating to aerobatics. When Tom is not flying he remains mobile using a TGA ‘Superlight’ which is a 3-wheel mobility scooter that can be easily dismantled for transportation in a car. This 4mph model gives Tom freedom at home to visit the shops and friends as his mobility is restricted due to his age and following a stroke in 2004. He was featured on BBC television during August 2013 when he successfully completed his most daring wing walk to date, across the Irish Sea from Castle Kennedy in Scotland to the City of Derry airport in Ireland. He flew for 81 minutes strapped to a vintage Boeing Stearman biplane and intends to complete a similar feat in March 2014 across the Mediterranean Straits of Gibraltar.

Tom began training to be a pilot at the mere age of 80, one week after his wife Isabel passed away. During Isabel’s successful career in the RAF, she had joked that he would never be able to fly a plane which inspired him later in life to ‘make her proud’ with his aerobatic stunts. Tom worked until he was 79 as the owner of a successful building company that had been previously established by his father. It traded for over 100 years until Tom retired in 2000 and he began pursuit of a pilot’s license. Tom completed the majority of his CAA (Civil Aviation Authority) pilot training however due to his age, he was not allowed to fly single-handedly, especially when performing dramatic aerial manoeuvres. As Tom is an independent person thanks to his TGA mobility scooter, he prefers not to need help so wing walking appealed as a solo, daredevil sport. In fourteen years, Tom has achieved nine world records, wing walked 30 times and experienced every aerobatic stunt possible either stood on the wing or at the pilot’s controls.

Tom explained: “It still makes me smile when I remember my wife joking that I would never be capable of piloting a plane or performing stunts in the air. Whenever I fly I carry a photograph of Isabel and will be doing the same when I tackle my latest challenge in March. Wing walking is pretty grueling in terms of the wind buffeting you experience when travelling so high up at speeds of around 80mph. Just think about sticking your head out of a car window at that speed and you’ll start to understand what it feels like. Saying that, I absolutely love the ‘freeing sensation’ and I am really privileged to be able to achieve these feats whilst raising money for charities such as Cancer Research and the British Heart Foundation.”

Tom continued: “When I am on terra firma, I have to thank my TGA ‘Superlight’ mobility scooter for that sense of freedom. Without it I would not be able to visit my local boating lake where I regularly row to keep fit for my wing walk challenges. It may not be quite as fast as the bi-planes I am used to and I can’t do a loop-the-loop, however its manoeuvrability and comfort is far better! I do hope my latest wing walking endeavor delivers as many donations as possible for Cancer Research and once I’ve landed, I’ll begin planning the next.”

TGA is based in Sudbury, Suffolk and has been a respected designer, manufacturer and provider of mobility products for almost 30 years with a specialty in scooters. Find out more at www.tgamobility.co.uk