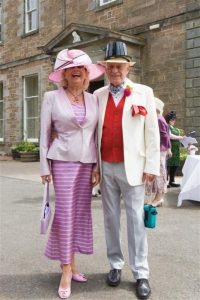 An Ascot Gold Cup Tea at Leuchie House in East Lothian raised over £8,000 in funds for the respite care centre and the local RNLI, as the two charities combined forces for a spectacular afternoon of fizz, flutters and first-past-the-post celebrations.

One of the unexpected highlights of the day was the presentation of a boutique voucher for the best-dressed lady, which went to Lorraine Skene of North Berwick who first wore her eye-catching outfit to her daughter’s wedding last year –  just weeks after leaving hospital following a brain haemorrhage.

Meg Maitland, who runs the eponymous dress shop on North Berwick High Street, donated the voucher and Lorraine was picked by impartial judges for her outfit of fuschia and indigo silk with matching accessories.

Lorraine was in hospital for three months from January last year just after she had bought the outfit for her daughter’s wedding and her daughter Emma took the dress along to the hospital in Edinburgh during Lorraine’s treatment to give her an incentive to recover in time for the wedding, which she was considering postponing.

“I’m absolutely fine now, I’ve been very lucky. Getting the best-dressed prize was the icing on the cake, I’m so pleased,” said Lorraine.

There were almost 200 punters at the event, which was held in a marquee on the lawn at Leuchie House, which offers respite breaks for people with long-term conditions and their families. 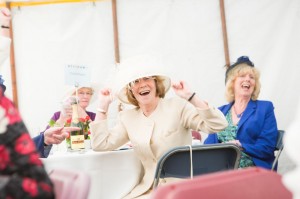 Hew Hamilton-Dalrymple, whose family owns Leuchie House, an 18th Century classical mansion house set in the East Lothian countryside, said at the event: “In these difficult times, if we can combine raising money for charities with having a good time, what better way to spend an afternoon?”

Mairi O’Keefe, the CEO at Leuchie House, said the collaboration between an established charity such as the RNLI with Leuchie, which was only set up as an independent charity two years ago, was a winning combination.

What is World Autism Awareness Week?