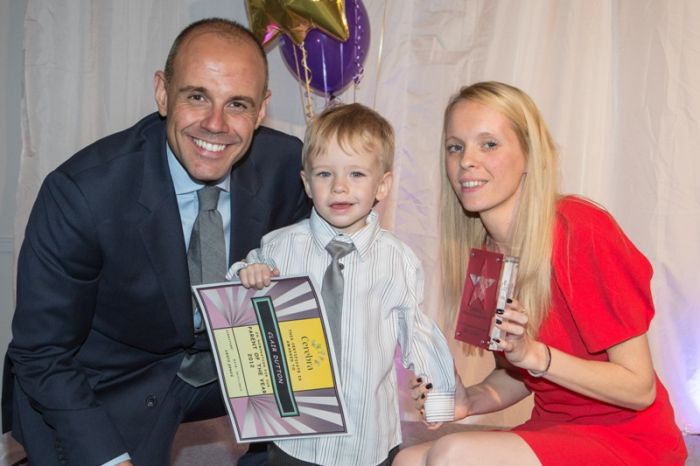 Parent of the Year Clair Dutton

National children’s charity, Cerebra, held its annual Children’s Awards ceremony yesterday.  The awards ceremony is designed to celebrate the inspirational achievements of some of the children it helps.

Cerebra aims to improve the lives of children and young people with neurological conditions, through research and direct, on-going support.  Each year the charity holds a special awards ceremony to celebrate the amazing achievements of some of the children it helps, as well as the parents, carers, volunteers, brothers and sisters who help them face their challenges.  This year’s event was held on 26 November at Tortworth Court Hotel in the Cotswolds and was hosted by BBC TV presenter Jason Mohammad.

This year the charity gave awards in six categories with the winners coming from across the UK:

Outstanding Bravery and Fantastic Family: Ten year old James Bell and his family from Keyworth, Nottingham, attended the ceremony thinking that James had won an award for Outstanding Bravery. They were surprised and delighted to also be given the special award of Fantastic Family. James suffers from a range of neurological conditions which have a tremendous impact on his daily life.  Despite this, James remains cheerful and positive never complaining about his treatment or the incredible pain he is in. He is supported by his wonderful family –parents Kirstie and Ian and little sister Emma – who do so much to make sure he gets the most out of life.

Achievement: Ten year old Jake from County Armargh has hemiplegia and cerebral palsy affecting his co-ordination, movement and balance. When his Dad was deployed to Afghanistan Jake did his best to be man of the house even though he missed him terribly. This year his Dad returned joined Jake as he undertook the challenge of climbing Slieve Donard, Northern Ireland’s highest mountain, with the Boy’s Brigade. It was a struggle but Jake made it to the top to the cheers of all his friends.

Courage: Thirteen year old Alan Green from Wythenshawe, Manchester, has autism which brings a range of challenges to his daily life. Alan was so badly bullied at school that he suffered total memory loss and couldn’t even remember the faces of his own brothers. With the help of his family and psychologist Alan is now thriving at his new school. He has met his challenges with real courage.

Brilliant Brother: Eren Souleiman from Brookland’s Park, Hertfordshire is a dedicated and caring older brother to six year Emre who has cerebral palsy. Eren goes out of his way to help his little brother, giving up his time, energy and even his pocket money to encourage and comfort Emre.

Volunteer of the Year: Jean Wilson from Worcester makes a real difference to the lives of so many families. As well as caring for her three children, one of whom has autism, Jean has founded the New Hope project which provides daytime respite care for disabled children and runs outings on weekends and in school holidays.

Parent of the Year: Dedicated mum Clair Dutton from Doncaster has gone that extra mile to build a stable future for her family.  Two year old Coby was born prematurely and suffered a bleed on his brain resulting in hemiplegia.  While devoting herself to giving her son the care and support he needs, Clair has completed a law degree by distance learning and is currently training to be a teacher.

This is the fifth year the charity has held an awards ceremony.  Chris Jones, Chief Executive of Cerebra said “I am delighted that we are once again applauding these inspirational people and celebrate their amazing achievements”.

For further information on Cerebra please visit www.cerebra.org.uk or phone 01267 244200.

8 out of 10 disabled people and carers concerned about the future, Christmas survey finds.