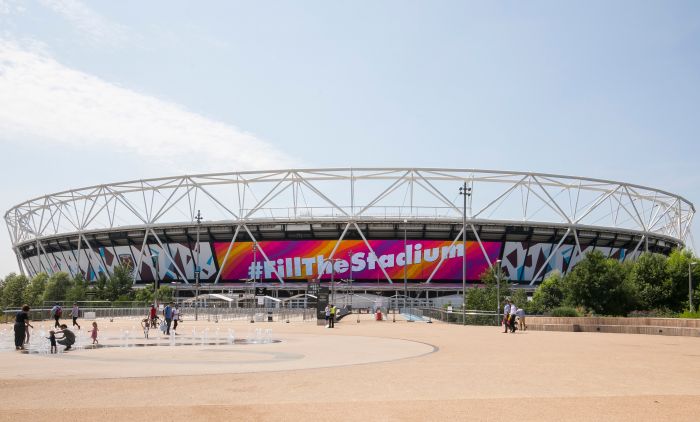 On exactly three weeks to go until the start of the World Para Athletics Championships, organisers London 2017 Ltd have announced record sales with more than 230,000 tickets sold. Sales are bigger than all of the previous eight editions of the championships combined and the biggest ever outside of a Paralympic Games.

Sales were given a stellar start following the on sale period that launched after the Rio Paralympic Games in September. Then in January, a further outstanding 100,000 tickets were sold as part of a schools programme, 90,000 of which went to schools across London.

Yet organisers are urging more supporters to come and support the best para athletes in the world, launching their #FillTheStadium campaign to ensure as many supporters as possible pack the London Stadium at the event taking place between 14-23 July.

Supported by athletes and celebrities over the coming three weeks, fans of Para athletics will be urged to make the great even greater by adding to the numbers headed for the iconic Queen Elizabeth Olympic Park.

Ed Warner, Co-Chair of London 2017 said: “We’re thrilled to have broken records for the best ever selling World Para Athletics Championships, but we’re determined to make sure as many fans as possible are inside the stadium supporting those athletes.

“Unlike a Paralympics, this summer, the World Para Athletics Championships comes before the IAAF World Championships and we want to make sure the stadium is rocking from the very start of the entire Summer of World Athletics.

“Para sport has an impact – it brings people together and it showcases the best of human achievement, so I call upon people to #FillTheStadium and support our best athletes this summer.”

Sir Philip Craven, IPC President, said: “Even before London 2017 begins, it is a record breaking event in so many ways.  Organisers have already sold more tickets than all previous World Championships put together and I really believe that this event will be a celebration of everything that is great about Britain.

“I am fully confident London 2017 will be a very special event.  I fully support #FilltheStadium as it’s a chance to celebrate everything that is good about the human spirit and see first-hand how positivity can overcome negativity.

“Para athletes, including many from Great Britain, have been in record breaking form already this year and I fully expect performance levels to step up another gear inside the tremendous London Stadium.”

“Last summer in Rio we saw once again the power that Paralympic sport has to inspire and unite people and this July will be no different at the London Stadium.

“The Championships will be brilliant and I urge everyone – from sports fans wanting to see the world’s best to families looking for a great day out – to come and fill the stadium and celebrate an event that will make Britain proud.”

The World Para Athletics Championships London 2017 kick off the Summer of World Athletics and the biggest sporting event in the world in 2017 with the IAAF World Championships following at the London Stadium from 4-13 August.

For the first time ever both the World Para Athletics Championships and IAAF World Championships are being held in the same city in the same summer. The summer of World Athletics is the biggest event to be staged at the London Stadium since the 2012 Olympic and Paralympic Games with 30 sessions scheduled across 20 days.

The pioneers of disability sport