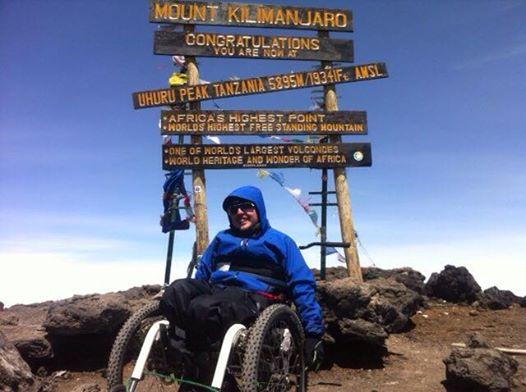 Iain Fryatt achieved something he never thought would be possible – he reached Uhuru Peak on Mt Kilimanjaro.  At 5895m this is the highest free standing mountain in the world.  A feat attempted by 15,000 people a year, but completed by only 40%.

The difference between their attempts and Iain’s was that he completed the climb using his Mountain Trike – an all-terrain wheelchair – a first for Iain and a world first for Mountain Trike.

Iain has a condition called Friedreich’s Ataxia, which he was diagnosed with at the age of nine.  It is a degenerative disease that primarily affects the nervous system and the heart, meaning that Iain needs to use a wheelchair.

Iain and his team followed the Rongai Route, taking 8 days to climb the mountain and 2 days to descend it.

They started at the Rongai Gate, passing through plantations, rain forests and finally through bush country, stopping at Simba Camp (2650m).

The next day they trekked through bush and heath to Second Cave Camp (3450m), where they spent two day acclimatisation.

After the two days they traversed through moorland and over several ridges to Third Cave Camp (3979m), where again they spent two days acclimatisation.

The last camp before there ascent to the top of the mountain was called School Hut (4700m), which to get to meant negotiating moorland and scree slopes.  Again this was a two day stop over for acclimatisation.

The final climb day started at 3am, up steep scree to Gilman’s Point (5685m) and then along the crater rim to Stella Point (5756m) and finally up Uhuru Peak!

Talking about his experience, Iain says, “Although there were a variety of landscapes the Trike went through, they all had one thing in common… Rocks!  At times these sorely tested the mettle of the Mountain Trike, at other times they meant that I had to be pulled, pushed or lifted to get round them.  Despite these obstacles the Mountain Trike survived the trek, having only sustained a broken steering cable.  Without the Mountain Trike it would not have been possible for me to take part in this adventure which only a few years ago I couldn’t even dream of doing.”

Iain and his team –  his Dad, his partner Karen, two brothers Callum, Craig, cousin Billy and Team Medic, Nick – embarked on the challenge of a lifetime to raise money for Ataxia, UK to help fund research into a possible new treatment called Nicotinamide, which may stop the condition progressing and may even turn it around.

For more information or to donate to Iain’s cause here

For more information about Mountain Trike, head to www.mountaintrike.com