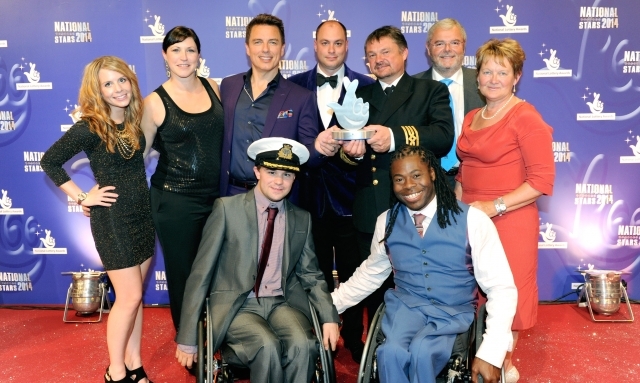 Members of The Jubilee Sailing Trust hit the red carpet and accepted their National Lottery Award at a star-studded awards ceremony, to be broadcast on BBC One this Friday.

The charity was voted the nation’s favourite Sport project in this year’s National Lottery Awards.  The project will be seen receiving the prize by millions of viewers at 10.45pm on Friday 19 September on the National Lottery Stars 2014 programme.

The Jubilee Sailing Trust (JST) brings together men and women of all physical abilities, through the adventure and challenge of sailing aboard two tall ships, Lord Nelson and Tenacious.

Project leaders mingled with stars like Pixie Lott, Jade Jagger and Scott Mills, during the ceremony hosted by John Barrowman.  A short film featuring a visit from Ade Adepitan, who surprised the Jubilee Sailing Trust with news that they had won their National Lottery Award, will be shown on the programme.

Duncan Souster, Chief Executive of the Jubilee Sailing Trust, said: “We are a small charity trying to get our message out and reach as many people as possible who could benefit from our work.  We very much hope on the back of our Awards success that hundreds of people who had not heard of us before will get the chance to take part in one of our voyages.“

Jackie O’Sullivan from the National Lottery added: “The National Lottery Awards recognise and reward the life-changing impact of Lottery-funded projects across the country. The Jubilee Sailing Trust is a deserving winner of the Best Sport Award – National Lottery players can be proud that they fund and support this fantastic organisation.”

Over £6 million of National Lottery funding awarded by Sport England helped Southampton-based JST to widen its impact.  Funding was invested in a purpose-built tall ship called Tenacious following the popularity of its first ship, the Lord Nelson –  the only two ships in the world that are accessible to all physical abilities.  As well as building people’s confidence in working as part of a team, JST also improves employment opportunities by teaching other life skills.  Find out more about JST at www.jst.org.uk